The home of the royal family
While you might not be able to enjoy tea with the Queen, you can get a taste for royal life at Buckingham Palace with the Changing of the Guard ceremony.

Soak up the history
The River Thames and its iconic Parliament House make for an ideal photo op - rain, sleet or shine.

Scale great heights with friends
The famous London Eye is a fantastic way to see the city from above.

Get caught up in the energy of it all
From Piccadilly Circus to Pall Mall, make your way around the Monopoly board in London

Few cities can match the fun that comes naturally to London. Beloved as one of the world's greatest cities, the historic English capital is practically drenched in popular culture, artistic flair and one too many pints. Where the Tower of London tells sordid tales of betrayals, torture chambers and kings, the boutiques along Soho's Carnaby Street continue to bask in their swinging Sixties fame and the Tate Modern displays all that is up-to-the-minute in the art world.

Though it may be the shining beacon of British life and home to the United Kingdom's famous royal family, London's immense diversity makes it a world in a city. You never have to walk far to find cuisine from every country, varied music pulsates from the clubs to the city's cabs, and high-street shopping is just the tip of the retail iceberg. From the razzle-dazzle of the West End to the peaceful greenery of Hampstead Heath and the endless hum of chatter permeating from every corner pub, fun in London comes in all forms.

And it's not all just Oxford Street, Piccadilly Circus, Leicester Square and the rest of the Monopoly board. London's boroughs are a pick-and-mix bag of allsorts. Take in the boho stylings of Notting Hill, wander the genteel residences of Mayfair, get into the Afro-Caribbean vibe of Brixton, shop 'til you drop on Kensington High Street, get on your soapbox in Hyde Park Corner and sort yourself a curry and a pint in Brick Lane in London's East End.

Needless to say, London rarely witnesses a dull moment. This is, after all, the birthplace of punk, the residence of the world-famous West End and home of more live comedy performances than any other city in the world. It's where everyone's favourite wizard Harry Potter lived under the staircase, the Beatles broke hearts in the swinging Sixties and One Direction continues the city's and the world's love affair with boy bands. So whether you crave punk, magic, Beatle-mania or more, London is sure to show you a good time. 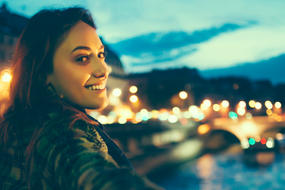